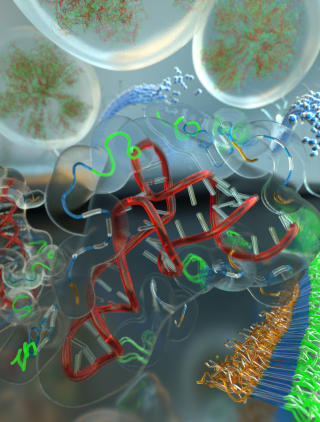 While much about Alzheimer’s disease remains a mystery, scientists do know that part of the disease’s progression involves a normal protein called tau, aggregating to form ropelike inclusions within brain cells that eventually strangle the neurons. Yet how this protein transitions from its soluble liquid state to solid fibers has remained unknown — until now.

Discovering an unsuspected property of tau, UC Santa Barbara physical chemist Song-I Han and neurobiologist Kenneth S. Kosik have shed new light on the protein’s ability to morph from one state to another.

Remarkably, tau can, in a complex with RNA, condense into a highly compact “droplet” while retaining its liquid properties. In a phenomenon called phase separation, tau and RNA hold together, without the benefit of a membrane, but remain separate from the surrounding milieu. This novel state highly concentrates tau and creates a set of conditions in which it becomes vulnerable to aggregation. Kosik and Han outline their discoveries in the journal PLOS Biology.

“Our findings, along with related research in neurodegeneration, posit a biophysical ‘smoking gun’ on the path to tau pathology,” said Kosik, UCSB’s Harriman Professor of Neuroscience and co-director of the campus’s Neuroscience Research Institute. “The signposts on this path are the intrinsic ability of tau to fold into myriad shapes, to bind to RNA and to form compact reversible structures under physiologic conditions, such as the concentration, the temperature and the salinity.”

The researchers found that, depending on the length and shape of the RNA, up to eight tau molecules bind to the RNA to form an extended fluidic assembly. Several other proteins like tau are known to irreversibly aggregate in other neurodegenerative diseases such as amyotrophic lateral sclerosis, more commonly known as Lou Gehrig’s disease.

“There is an interesting relationship between intrinsically disordered proteins that are predisposed to become neurodegenerative — in this case tau — and this phase separation state,” said Han, a professor in UCSB’s Department of Chemistry and Biochemistry. “Is this droplet stage a reservoir that protects tau or an intermediate stage that helps transform tau into a disease state with fibrils or both at the same time? Figuring out the exact physiological role of these droplets is the next challenge.”

Subsequent analysis will consist of an intensive search for the counterpart of tau droplets in living cells. In future work, the researchers also want to explore how and why a cell regulates the formation and dissolution of these droplets and whether this represents a potential inroad toward therapy.