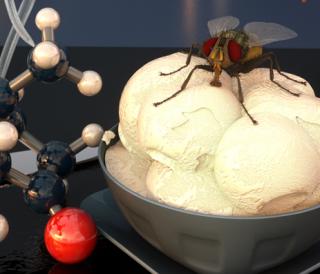 If you've ever wondered how you learn to like a food you dislike, a new study conducted by UC Santa Barbara's Craig Montell, Duggan Professor of Neuroscience in the Department of Molecular, Cellular, and Developmental Biology, may offer an answer. The work addresses a central question in neurobiology –– how experience can alter animal behavior. The research, just published in Nature Neuroscience, was conducted by Montell's team, which includes lead author Yali Zhang, Rakesh Raghuwanshi, and Wei Shen.

Among the most widely observed, but poorly understood modifiable behavioral phenomena is that dietary experience can alter taste preferences. This is essential for survival, since animals from insects to humans have to respond to a changing food environment. Alterations in taste are well known in humans, as people from the Far East have different taste preferences than people from the West. Individuals who move from one culture to another typically learn to accept the local foods, some of which were originally aversive.

Using the fruit fly, Drosophila melanogaster, as an animal model, the researchers unraveled a mechanism to explain how animals modify their taste preferences. "This study was inspired by trying to understand how it is an animal learns to like foods they didn't like before," said Montell. "We want to understand taste proclivity because it is a universal behavior in all animals."