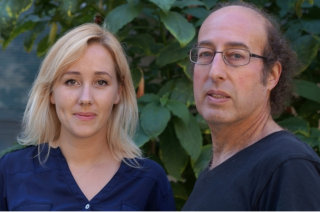 Two years ago, the federal government launched the BRAIN (Brain Research through Advancing Innovative Neurotechnologies) Initiative, a large-scale partnership between public and private research institutions designed to catalyze discovery and innovation in neuroengineering. Rising to the challenge, UC Santa Barbara has established a campuswide program to foster such collaborative brain research.

Now, the UCSB Brain Initiative has its own full-time campaign manager, neurophysiologist Bridget Queenan, who is the program’s associate director. A recent arrival from Johns Hopkins University, Queenan received her Ph.D. in neuroscience from Georgetown University and holds a bachelor’s degree in biochemistry from Harvard University.

“The BRAIN Initiative asks scientists to fundamentally alter the landscape of brain research going forward by coming up with completely new devices and strategies,” Queenan said. “And UCSB is the perfect campus for that because it has all the right starting material. We have world-class engineering, physics and computer science departments, but we also have the right culture of idealism, innovation and teamwork — all of which combine to create a unique environment for collaborative breakthroughs.”

According to Kenneth S. Kosik, director of the UCSB Brain Initiative, the breadth of neuroscience as a field of study requires a campuswide approach. “It’s not in one department,” he said. “It extends from the Division of Mathematical, Life, and Physical Sciences to the College of Engineering to the social sciences and the humanities — because we have to think of the implications of neuroscience as well.”

A major focus area for the UCSB Brain Initiative is concussion and traumatic brain injury. “We’re looking to marry our competency in materials research with our human brain imaging team to create a thorough examination of the physical properties of the brain before and after injury,” said Queenan. A second area of interest centers on leveraging UCSB’s expertise in photonics to invent new brain-imaging technologies. “We just can’t see what the human brain is doing,” said Queenan. “The tools that exist currently can only get us part of the way there.”

The UCSB Brain Initiative also seeks to build on the campus’s strengths in computer engineering and computer science to elucidate the function of the brain. “We have people who are figuring out what the brain does, people who are writing programs inspired by the brain, people who are building hardware to mimic that behavior,” said Queenan. “One goal of the initiative is to pull all of this work together into a high-powered neural computing center.”

The ongoing projects in neuromimetic hardware and software development will allow researchers to increase the capacity for data processing and storage, creating the next generation of computers. However, by partnering with neuroscientists, these researchers will also help refine scientific understanding of what normally occurs in the brain.

In order for the initiative to be successful, researchers must be willing to collaborate across departmental lines, noted Kosik. Arriving this year are three new faculty members who bring their interdisciplinary talents to the UCSB Brain Initiative.

Julie Simpson is an assistant professor in the Department of Molecular, Cellular, and Developmental Biology (MCDB). She came to UCSB from the Howard Hughes Medical Institute’s Janelia Research Campus in Virginia, where her lab developed tools to visualize and manipulate specific neurons. These manipulations allow her to dissect the components of complex behaviors in fruit flies, determining which cells in the brain produce which outcomes.

Emily Jacobs, an assistant professor in the Department of Psychological & Brain Sciences who came from Harvard University, uses human brain imaging to establish basic principles of how sex steroid hormones shape the neural circuitry underlying higher-order cognitive functions. Her research helps define the normal role of sex steroids in the healthy adult brain and reveals the consequences of ovarian hormone depletion — which occurs during menopause — on memory circuitry.

Michael Goard will join UCSB in the spring as an assistant professor in the departments of psychological and brain sciences and MCDB. His lab will investigate the neural circuitry underlying perceptual and cognitive abilities using large-scale calcium imaging, multi-unit electrophysiology and optogenetic manipulation of neural activity in behaving mice.

According to Queenan, the UCSB Brain Initiative is not just science in the traditional sense — test tubes and experiments done in isolation — but a community of inquiry and innovation that goes beyond the lab. “We want to immerse people — brain, heart and soul  — in these research challenges, so they can come up with ideas nobody else has,” Queenan said.

“There’s already so much here and it’s only going to get better,” she added. “It’s coming from all sides of the campus. This year, our Interdisciplinary Humanities Center has an entire seminar series on ‘The Humanities and the Brain.’ There are no boundaries here. What we are trying to accomplish is so massive, so important that we need everybody: engineers, scientists, artists, musicians, historians, investment bankers, patients, doctors and parents. If we’re going to solve the greatest mystery of all time, we’re going to need a lot of brain power.”