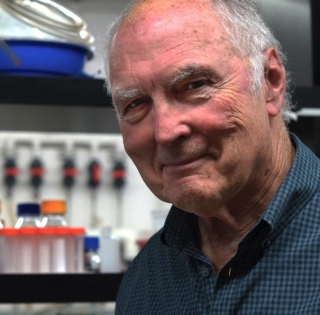 Even before terms such as “venture capitalist,” “tech startup” and “disruptive technology” entered the mainstream vernacular, UC Santa Barbara was a regional hub for high-tech innovation.

As far back as the mid-1980s, faculty members whose tech savvy and business acumen were matched only by their research and teaching prowess took advantage of a healthy entrepreneurial environment and a climate ripe for technological innovations.

Among UCSB’s most notable early entrepreneurs and tech pioneers are materials professor Steven DenBaars and physics professors Virgil Elings and Alan Heeger. DenBaars co-founded Nitres, a solid-state lighting company, while Elings sought to make atomic force microscopes readily available to scientists and engineers — effectively kickstarting the field of nanotechnology — with his company Digital Instruments. Heeger, before he won the 2000 Nobel Prize for chemistry, had been exploring the possibilities of organic LED technology with his company Uniax, which was later acquired by DuPont Display.

More recently, Galen Stucky, a professor of materials and of chemistry, made a major advance in medical technology when he developed a kaolin clay-based gauze that can stanch arterial bleeding. The potentially life-saving innovation has become a staple for first responders. For this work, Stucky received the 2008 Advanced Technology Applications for Combat Casualty Care Award from the U.S. Department of Defense.

And now he is being honored in his own backyard. Stucky will receive the “Spirit of Innovation” award in a new program recognizing area innovators. The inaugural Central Coast Innovation Awards will be held March 24.

A Hub of Entrepreneurial Activity

“UCSB is absolutely essential to fostering entrepreneurship and early-stage tech company growth,” said Jason Spievak, a UCSB alumnus, entrepreneur and angel investor who has helped to build and finance more than a dozen companies in the Santa Barbara area. “The university is the hub of entrepreneurial activity on the California Central Coast.”

As the region’s center for knowledge and novel ideas, UCSB was developing its startup culture at the same time Stanford University, Massachusetts Institute of Technology and UC Berkeley were emerging as leaders in the field. Thanks to a robust entrepreneurial ecosystem that has evolved to support the high-risk yet high-reward world of tech entrepreneurship, innovation continues to grow and flourish in the region since those early days. Other important factors contributing to that growth are a community that welcomes creative ideas and solutions and a campus that has stepped up to provide foundational business training for aspiring tech entrepreneurs.

“UCSB has received national recognition for the quality and consistency of the startups it spins off,” said Sherylle Mills Englander, director of UCSB’s Office of Technology & Industry Alliances (TIA). “And, with the establishment of TIA, the Technology Management Program and the CNSI Incubator, UCSB’s startups have more support from the campus than ever before.”

Meanwhile, UCSB researchers across many disciplines, from science and engineering to the social sciences and humanities, continue to work on society’s most pressing problems. One such sweeping issue is climate change, with scientists and engineers studying its impact on the planet while social scientists and humanities scholars examine topics such as climate justice and environmental ethics.

To recognize the wealth of innovative ideas and the enthusiasm and energy behind them, UCSB’s TIA, along with the Pacific Coast Business Times, is hosting the Central Coast Innovation Awards. The event will honor some of the region’s finest innovators — both on-campus and off — in fields that are close to the community’s heart, including agribusiness, environmental science and nonprofits.

Prior to the awards presentation, TIA will host Startup Village, which brings together about 30 of the hottest new movers and shakers in innovation, including those from UCSB, California Polytechnic University San Luis Obispo, California Lutheran University and the wider community. Representatives from such fields as medicine and health, agriculture, environment, lifestyle and “smart” technology will be on hand to talk about their work and make industry connections.

Most of the Village participants are fairly new, and in a nod to the strength of the area’s entrepreneurial tradition, at least one newcomer is a spinoff of a UCSB spinoff: the laser-based lighting company SoraaLaser, which sprung from Soraa, the LED-based lighting company started by DenBaars, UCSB materials professor James Speck and professor Shuji Nakamura, recipient of the 2014 Nobel Prize in Physics for his work on the bright blue LED.

Other featured startups include companies whose founders completed training with UCSB’s Technology Management Program. Among them are Milo, developers of a blood-alcohol-level monitoring wearable; Salty Girl Seafood, which aims to source sustainable seafood; Shadowmaps, an urban location app that’s more sophisticated than conventional GPS; and Apeel Sciences, whose goal is to provide an environment- and human-friendly alternative to pesticide use while reducing food waste.

“The Startup Village will be a great opportunity for us to share with members of our community the exciting new technology we are developing,” said Kristin Denault, UCSB alumna and founder of up-and-coming solid-state lighting company Fluency Lighting. “As a new entrepreneur, I’m also looking forward to learning more about all of the amazing startups in our area, meeting inspirational individuals, and helping to build a network of enthusiasm and support for startups in our Central Coast area.”