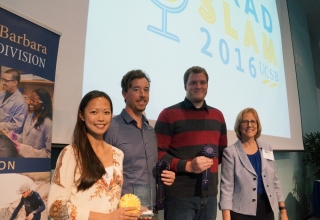 Seventy-six students, 14 rounds, three minutes. UC Santa Barbara’s annual competition of ideas and communication — Grad Slam 2016 — has found a new winner, and her name is Nicole Leung. The graduate student emerged victorious Friday, April 15, to take home the $5,000 grand prize for her talk, “Lighting the Path from the Eye to the Brain.”

“To be able to communicate and make our work relatable to a lay audience is one of the most important skills we can have as researchers,” said Leung, a researcher in UCSB’s Montell Lab who used her three minutes to explain her work investigating how light is converted into information in the brain, using the fruit fly as a model. “So I’m really grateful for Grad Slam for helping me to put my research in a way that I can share with everyone.”

The competition was fierce over the first half of April as grad students — smart, passionate and eager to get the word out — each prepared and rehearsed engaging short oral presentations on their research. Participants presented on a wide variety of topics: sparkling sea slugs, the search for dark matter, learning with video games, water security and Mexico’s drug war, to name just a few.

“It’s incredible how you get to see this fantastic work from all across the campus,” said Carol Genetti, dean of the graduate division at UCSB, and moderator of the competition. “We like the cross-pollination and to hear everybody speak.”  Scoring for these mini-talks is weighted more toward the quality of the presentation, she explained, and less on the subject matter itself.

Additionally, visual elements are limited to three slides with no animation (although short internet videos are allowed) to emphasize the actual talk, as well as in an effort to level the playing field between all participants, in terms of resources.

Established in 2013 at UCSB, the award-winning Grad Slam is a way to encourage grad students to share their passion for their work and to become more articulate about it.

“It’s important for our graduate students to have the ability to state succinctly why their research matters,” Genetti said. “You can use that skill in so many situations, whether you’re looking for a job for example, or even if you’re just talking to your aunt at Thanksgiving dinner.” Another benefit, she added, is that the students become aware of the richness and diversity of research on campus.

Ten rounds of student presentation kick off the preliminary tier of competition, and winners of each round — two chosen by the judges, one by the audience — take their work to the semifinals, of which there are four rounds. The first two semifinal rounds consist of judge-chosen winners, and the second two rounds set People’s Choice winners in competition. All winners from the semifinals return once again for the finals, and to compete for the chance to represent UCSB in a systemwide competition to be held in San Francisco.

Last year’s UCSB winner, linguist Daniel Hieber, took second place in the UC-wide competition for his presentation on Chitimacha, an extinct native language of the Gulf of Louisiana. This year, he presented the award to Leung, who took the $5,000 grand prize, and will be heading north to represent UCSB at a systemwide Grad Slam April 22.