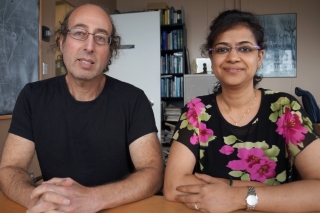 Compared to other mammals, humans have the largest cerebral cortex. A sheet of brain cells that folds in on itself multiple times in order to fit inside the skull, the cortex is the seat of higher functions. It is what enables us to process everything we see and hear and think.

The expansion of the cerebral cortex sets humans apart from the rest of their fellow primates. Yet scientists have long wondered what mechanisms are responsible for this evolutionary development.

“This lncND, as we’ve called it, can be found only in the branch of primates that leads to humans. It is a stretch of nucleotides that does not code a protein,” said senior author Kenneth S. Kosik, the Harriman Professor of Neuroscience Research in UCSB’s Department of Molecular, Cellular, and Developmental Biology. “We demonstrate that lncND is turned on during development and turned off when the cell matures.”

Lead author Neha Rani, a postdoctoral scholar in the Kosik Lab, idenfitied several binding sites on lncND for another type of RNA called a microRNA. One of them, called microRNA-143, binds to lncND.

“We found that lncND could sequester this microRNA and in doing so regulate the expression of Notch proteins,” Rani said. “Notch proteins are very important regulators during neuronal development. They are involved in cell differentiation and cell fate and are critical in the neural development pathway.”

Kosik describes lncND as a platform that binds these microRNAs like a sponge. “This allows Notch to do what it’s supposed to do during development,” he explained. “Then as the brain matures, levels of lncND go down and when they do, those microRNAs come flying off the platform and glom onto Notch to bring its levels down. You want Notch levels to be high while the brain is developing but not once maturation occurs. This lncND is an elegant way to change Notch levels quickly.”

To replicate these cell culture results, Rani used human stem cells to grow neurons into what is called a mini brain. In this pea-sized gob of brain tissue, she identified a subpopulation — radial glial cells (neuronal stem cells) and other neural progenitors — responsible for making lncND.

But the researchers wanted to see the radial glial cells in actual human brain tissue, so they turned to colleagues in the Developmental & Stem Cell Biology Graduate Program at the UC San Francisco School of Medicine. Using in situ hybridization in developing human brain tissue, Rani, in collaboration with UCSF researcher Tom Nowakowski, found lncND in neural precursor cells but not in mature neurons.

“It was right where we thought it would be in brain tissue,” said Kosik, who is also the co-director of UCSB’s Neuroscience Research Institute. “But we still had one more thing we had to do because people would still not be satisfied that we had done everything possible to show that lncND was really doing something functionally.”

So the UCSF team introduced lncND into the fetal brain of a gestating mouse. Green fluorescent protein labeling allowed them to see the early development pattern and show that lncND, which ordinarily is not present in mice — lncND is present only in some primates including humans — had a functional effect on development.

“When we overexpressed lncND in the mouse fetus, we actually affected development in the predicted manner,” Kosik said. “The early developmental pattern was shifted toward more precursor cells, even though the mouse does not make lncND at all.”

According to Kosik, this work not only identifies a very critical gene for human brain development but also offers a clue about a component that likely contributed to brain expansion in humans. “We have shown that lncND might be an important player in human brain expansion, which is exciting in itself,” Rani said. “Another interesting aspect of this work is that lncND appears to help regulate the key developmental pathway of Notch signaling.”