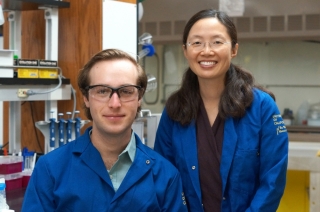 For microscopic organisms, bacteria are pretty smart. After all, some have outwitted just about every antibiotic ever developed. So the solution to their resistance likely won’t come in the form of new drugs. Hope may lie instead in a completely new direction: bacteriophages.

According to UC Santa Barbara chemist Irene Chen, these viruses, which infect and replicate within bacteria, may hold the key to new and more effective treatments of bacterial infections.

To explore this idea, Chen has been awarded a $2.1 million New Innovator Awardfrom the National Institutes of Health (NIH). For the next five years, she and graduate student Samuel Verbanic will be working in collaboration with Goleta Valley Cottage Hospital to sequence microbes from swabs collected at the hospital’s Ridley-Tree Center for Wound Management.

“I am extremely pleased that the NIH has recognized Irene Chen’s innovative work with this much-deserved award,” said Pierre Wiltzius, the Susan & Bruce Worster Dean of Science and executive dean of the College of Letters and Science at UCSB. “She has rightly taken her place at the forefront of bacteriophage research. This project promises to have a lasting impact on the field of medicine and we as a university could not be more excited to support her in this endeavor.”

Because phages are much more genetically diverse than bacteria, they have the ability to evolve more quickly. “Even within the same family, you can see very little similarity among different phages,” said Chen, an assistant professor in the Department of Chemistry and Biochemistry. “There is huge genetic diversity out there to be tapped and a lot of it is directed at killing or inhibiting bacteria.”

Chen anticipates that many of the genes in the phages her team is sequencing will be unknown. In fact, up to 90 percent of phage genes don’t match those found in NIH’s GenBank database, an annotated collection of all publicly available DNA sequences.

Not only will Chen and Verbanic classify the genetic diversity of phages, they will also correlate phage species with bacterial sequences that promote wound healing. In addition, they will explore whether debridement — the process of removing dead tissue from wounds — improves wound health.

“Maybe we can see at a more mechanistic level what might be causing those correlations,” Chen said. “That’s our starting point for isolating genes that could be useful for fighting bacterial infections.”

Identifying correlates of wound healing also may enable the researchers to determine which wounds are problematic. “The eventual target is to find genes that correlate positively with healing,” she explained. “If they are indeed causative, then in the future, we could apply them to reorganize the microbial ecology existing in the wound.”

Chen is one of 48 recipients of the 2016 New Innovator Award. Designed specifically to support unusually creative new investigators with highly innovative research ideas at an early stage of their career, the award is part of NIH’s High-Risk, High-Reward Research program.