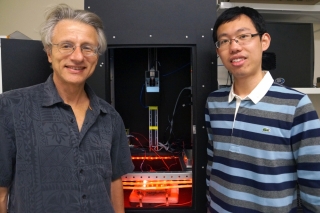 In classic experiments on frogs, scientists found that the amphibians’ urge to escape from dangerously hot water decreased significantly when the water temperature rose very gradually.

In fact, sensitivity of many animals to temperature — including humans — is similarly affected by the rate of increase. Exactly why, however, has not been understood.

Hoping to shed light on this phenomenon, UC Santa Barbara professor Craig Montelland graduate students Junjie Luo and Wei Shen developed fruit fly larvae as a model to reveal a mechanism through which the animal shows different behavioral responses to fast and slow rises in temperature.

The researchers discovered that a rapid 25-degree Fahrenheit temperature change caused a writhing response in fruit fly larvae. However, when the temperature was raised gradually, far fewer animals reacted, and for those that did, the average threshold temperature was significantly higher. The team’s findings appear in the journal Nature Neuroscience.

“We know a lot about how animals sense large and sudden increases in temperature,” said Montell, the Patricia and Robert Duggan Professor of Neuroscience in UCSB’s Department of Molecular, Cellular, and Developmental Biology. “They respond to noxious heat by initiating an escape response. But how is it that animals are so much less sensitive to the same hot temperature when the change is really slow?”

The answer to that question turned out to have two parts. First, Montell and his team identified the thermosensory neurons in the brain responsible for sensing the rate of temperature change, which helped to define the underlying molecular mechanism.

“When there is a really rapid change in temperature, you want to protect the brain, particularly in fly larvae because they’re cold-blooded and their body temperature equilibrates to the outside,” explained Montell. “If their brains feel a rapid increase in temperature, that stimulates the writhing response.”

“There’s a feedback mechanism that turns off this protein as quickly as it’s turned on,” Montell said. “When it’s turned on quickly, it stimulates the pathway to cause the writhing response. But when the process occurs slowly, the on and off mechanisms cancel each other out.”

The scientists posit that the ability to sense the rate of temperature change is a critical survival mechanism that allows an animal to quickly respond to and escape from a noxious thermal landscape before it is too late.

“We think similar mechanisms occur in other animals — for example, the frog,” Montell said. “It could be that related mechanisms affect temperature-sensitive TRP channels in humans as well. Ultimately, if a common mechanism is conserved across species, our findings may provide insight into how different animals adapt to the rate of temperature change.”